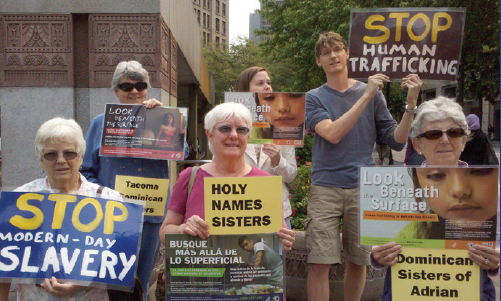 Longueuil, Quebec, Canada – October 28th 2014 – This year, the Congregation of the Sisters of the Holy Names of Jesus and Mary (SNJM) highlights its 10th anniversary of struggle against human slavery by publishing a retrospective.

The SNJM’s have been acting collectively against human trafficking since 2004 through efforts to educate and raise the awareness of the general public and all those who are involved.

To highlight this anniversary, the SNJM’s have introduced a document entitled «A decade of making a difference against human trafficking». The document recounts the major events which have marked these ten years of commitment and is available online at the following address: https://www.snjm.org/en/resources/human-trafficking

In conjunction with more than twenty coalitions, their persistence has contributed to legislation being passed in several countries. Today human trafficking is recognized as a problem and is being fought by a number of governments, as well as by multiple groups such as NGO’s and religious groups.

The Congregation of the Sisters of the Holy Names of Jesus and Mary (SNJM) is an international community of Catholic women religious, associates and lay consecrated persons. Founded in 1843 in Longueuil, Quebec, the congregation is called to a mission of education, and is active on three continents. Visit www.snjm.org