Marie-Rose Durocher, foundress of an apostolic community, revealed by her very life and actions that contemplation in action, a fundamental aspect of the spiritual life, was at the centre of her being.

For her, contemplation meant looking at God with the heart, being attentive to the mystery of God and discovering God’s loving Presence as revealed in the Names of Jesus and Mary, names which reveal the whole of their being.

Marie-Rose developed an attitude of attentive presence even when she was still a child. Later on, as a novice, she expressed her desire to be “a rose of pleasing fragrance for God,” wishing to honour God and to accomplish God’s plans for her in all things.

At the same time, she regarded God as a great fire dwelling within her, urging her to act, “to cast fire upon the earth.” (Luke 12:49) 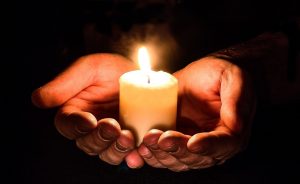 This deep desire became reality in her daily life through an attentive presence and through the gift of her whole being in service to the Church and to society, particularly through her mission of education as liberating action.

Marie-Rose Durocher passed on to her sisters “who were gathered together and sent out on mission in the names of Jesus and Mary” the ardent flame that burned in her own heart.

Walking in her footsteps, we seek to develop an attitude of contemplation that permeates and transforms our life, an attitude that inspires and supports all our commitments as well as our simple and loving acts each day.

“We desire to live in openness to the Spirit, available to the needs of the Church and the world,”

and to do so in a spirit of reciprocity and interdependence.

Presence to the other, wherever he or she may be, and being attuned to the issues of our world are ways that we remain on mission until the end of our days.

Our spirituality is expressed through “prayer, and by an interior attitude of presence to God in ourselves, in others, and in events.”  (Constitutions, No. 57).