Who was Eulalie Durocher?

Eulalie was born at Saint-Antoine-sur-Richelieu on October 6, 1811. Her father owned extensive agricultural holdings and her mother, who had studied with the Ursulines in Québec City, instilled in her the values of prayer, justice and openness. Although she had a lively and playful spirit, Eulalie was limited by fragile health.

During the twelve years when she was managing the presbytery in Beloeil and facilitating parish activities, she discovered the pressing need for the education among the people of Québec. She observed that girls had little opportunity to be educated. In 1834, in company with Henriette Céré and Mélodie Dufresne, she founded the Congregation of the Sisters of the Holy Names of Jesus and Mary, a community dedicated to education in Longueuil.

She died at the age of 38 after six years of religious life. By that time, however, the Congregation had been solidly established. Beatified in Rome in 1982, Mother Marie-Rose rests in the co-Cathedral of Saint-Antoine-de-Padoue in Longueuil. 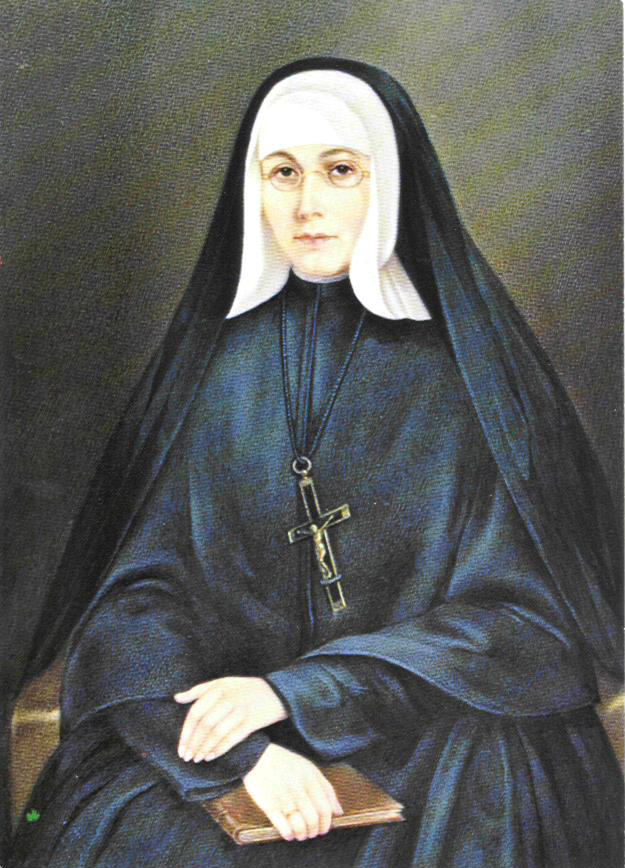 The tenth child of Olivier and Geneviève Durocher, Eulalie Durocher was born on October 6, 1811 to a well-respected family in Saint-Antoine-sur-Richelieu (Québec). Eulalie received her initial education on the lap of her mother, a former student of the Ursuline Sisters in Quebec City, and from her grandfather, a former soldier and defender of Fort Carillon. She went on to attend boarding school with the Sisters of the Congregation of Notre Dame in Saint-Denis-sur-Richelieu for two years. Despite her frailty, she was a lively and joyous child. At the same time, health problems made it impossible for her to continue her studies, and her dream of religious life seemed to be out of reach.

As a teenager, Eulalie proudly rode her beautiful horse Caesar to visit friends, the sick, and the less fortunate in her village. She also loved to spend time praying in the church and adoring Jesus present in the Tabernacle. Eulalie was eighteen when her mother died. This was a very difficult time in her life, but the young woman courageously stepped in to take charge of the household.

Shortly afterward, her brother Théophile, who had been appointed pastor of Beloeil, invited his father and sister to live with him in the presbytery of St. Matthew’s parish. Manager and hostess of the presbytery, Eulalie welcomed visiting priests to the presbytery and worked diligently for the parish and local community for 12 years (1831-1843). In company with her friend, Mélodie Dufresne, Eulalie visited the destitute, taught catechism to the children, organized liturgical celebrations, supported families through difficult times, and mobilized other parish volunteers to concerted action.

With the arrival of the Oblates of Mary Immaculate in Saint-Hilaire, in 1841, Eulalie lent her enthusiastic support to their evangelization efforts and founded the Association of the Children of Mary, the first organization of its kind in Canada. Her outreach and joyous personality attracted and transformed many young women.

Her years in Beloeil marked a very important phase in her life. Keenly aware of the political situation and the needs of the country, Eulalie deplored the poor level of religious instruction and the lack of schools, particularly for girls. Her desire to enter religious life remained with her, and she dreamed of the day when small convents could be established in the parishes. She was ready to join a religious community that Bishop Ignace Bourget was planning to bring to Québec from France.

To her great disappointment, the Sisters from Marseille were unable to come to Canada. Aware of her hopes and abilities, Bishop Bourget asked Eulalie Durocher to found a community herself. On October 28, 1843, Eulalie and Mélodie Dufresne came to live with Henriette Céré, who was already teaching at the parish school in Longueuil. Their house, which was provided by the pastor, Father Moïse Brassard, would serve as the cradle of the Congregation.

Being initiated into the religious life and starting an entirely new educational project was not an easy task, particularly as its pioneer women faced a series of obstacles from outright opposition, poverty, criticism, and a lack of understanding. However, a profound faith, open-mindedness and an ardent love for young people enabled them to lay a solid foundation for the Institute.

Under the name Mother Marie Rose, Eulalie was able to reach out to talented women and to provide them with excellent pedagogical preparation. The Brothers of the Christian Schools and the Oblates of Mary Immaculate lent vital assistance. According to her vision, each child must receive a well-rounded education: spiritually, academically, artistically and socially.

During the lifetime of the foundress, four houses were established: the convents in Longueuil, Beloeil, Saint-Lin and Saint-Timothée. In an effort to make education available to many more, Mother Marie Rose wanted a school to be built adjacent to each boarding school, where the same program could be offered free of charge to others, thanks to the income from the boarding schools.

Mother Marie-Rose provided leadership to the fledgling congregation until her premature death in 1849. Testimonies gathered at that time attest to the sanctity of her life, which was entirely dedicated to God and to people around her. On the occasion of her beatification in Rome on May 23, 1982, the Church declared Marie-Rose Durocher an apostolic woman and a herald of new times.