Education in the faith demands of us active involvement in the promotion of justice. In this spirit and according to the teachings of the Church., our educational endeavors have a special concern for the poor and disadvantaged.

This special concern for people who are poor, especially children, was evident from the very beginnings of our foundation, manifested by concrete actions responding to the expectations of our milieus and requests from the Church, for example, Marie-Rose Durocher welcomed young Irish girls in Montreal in 1847. Sisters in Jacksonville and Key West took care of patients suffering from a smallpox epidemic in Florida. Others assumed the role of zealous nurses to the wounded in the Spanish-American War. Still others took care of children who had been neglected or orphaned as a result of plagues and provided education and security for them.

Since the 1986 General Chapter, we have identified new creative approaches to education and reaffirmed our mission in the spirit of a liberating action that can be summed up as “Educate to liberate.” That is to say, to help the persons to “name” themselves, to find their own identity.

At the 2016 General Chapter, we made a commitment to “participate actively in the search for structures, relationships and actions that liberate life wherever it is threatened.”

We wanted to ”let ourselves be questioned by the emerging questions of our time.” Thus, the call to justice is a priority that animates and motivates all our apostolic actions. Fundamental human rights, human dignity, the health of our planet Earth, openness to other cultures, collaboration and interdependence, are values ​​that we deepen and seek to promote in many ways. 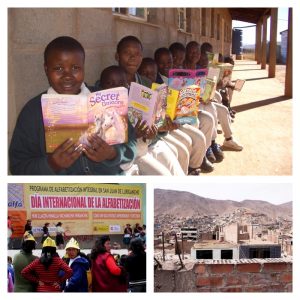 Today, there are still many sisters who are present in educational ministries, with a focus on education for justice and commitment to act. Others are engaged in actions that are more directly related to justice and to the promotion of human dignity. In collaboration with partners, we are active in many ways around the world.

Faithful in assuming its collective responsibility, our Congregation has adopted three corporate stands resulting from a process of analysis and reflection. They are: Struggle against human trafficking, Universal access to water and Migrant and refugee people.

Aware of global issues which involve multiple interactions, we work in collaboration with other organizations that promote values ​​similar to our own. Together, we dare to directly challenge leaders, elected officials and the media. We send letters and petitions and continue to raise awareness and to provide information.