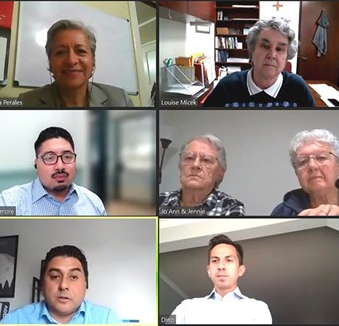 On March 10, Jennie Lechtenberg, SNJM and Jo’Ann De Quattro, SNJM (both Southern CA) participated in a local NETWORK-sponsored virtual delegation with the staff of their newly appointed California Senator Alex Padilla, who replaced Vice President Kamala Harris after she transitioned to the White House. Padilla is chair of the Senate Immigration Committee of the Judiciary. His office is crucial in seeking passage of the comprehensive immigration reform U.S. Citizenship Act of 2021.

Srs. Jennie and Jo’Ann expressed their support and made known their concerns about the areas lacking in the proposed legislation. They were also able to call attention to the tragic deportation of Haitians, which continues in the Biden-Harris administration. Sr. Jo’Ann was among the many Holy Names Sisters, including the PLT, who signed a letter to DHS calling on the Biden administration to stop expelling Haitians and other migrants seeking asylum in the U.S. To read the letter to DHS, click here.

Maria Elena Perales and the women religious who were part of this delegation are members of the Southern California Partners for Global Justice.