It was finally on October 31, 1925, that the remains of SNJM’s foundress, Marie-Rose Durocher, left the Congregation’s second Mother House, the Convent of Hochelaga (Montreal), to go to the new Mother House, located in Outremont.

This operation, which required following a series of procedures with ecclesiastical and civil authorities, caused a great deal of emotion among the members of the General Council at the time. It also provided the opportunity for the sisters and students of Longueuil and Hochelaga to testify their veneration of the foundress who would later be beatified. 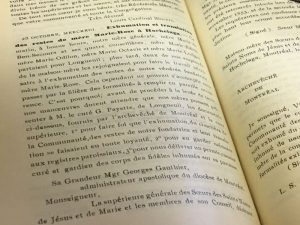 It is because of the rains that the exhumation of the remains of Mother Marie-Rose Durocher was brought forward while the preparations for the construction of the oratory to install the tomb in scagliola, were not finished in Outremont. It should be remembered that Mother Marie-Rose’s tomb was located on the grounds of the Convent of Longueuil (first mother house), barely 30 feet from the Saint-Antoine brook, known for its frequent spring overflows. A second exhumation in 1917 had been necessary to preserve the remains of the Foundress after an incident that had broken her coffin.

A detour through Hochelaga

As reported in the Chronicles of that day on October 28, 1925, the heavy rains preceding the day of this new exhumation completely disrupted the program. While the remains were to be moved from Longueuil to Outremont, the discovery of a coffin filled with water forced the authorities to modify their plans. After having respected all the imperatives related to these new conditions and faced with a late hour, the members of the General Council decided to bring the remains of their founder to Hochelaga.

While taking all the usual precautions in such circumstances, this stop at the Second Mother House gave the sisters and the students of the convent the opportunity to testify “of their filial piety” to the venerated Foundress, “either by asking her for favors, or by having her bones touched by many objects…”.

When the time came on October 31, 1925, at 2:00 p.m., the Mother General, accompanied by four other people, left Hochelaga with the remains of the foundress in the direction of the Outremont mother house. After the ceremony imposed by the circumstances, Bishop A.-V.-J. Piette presided over the exercises of the Rosary and the blessing of the Blessed Sacrament, the sisters and the crowd present were able to pay homage to the venerated foundress.

Since the work at the tomb was not yet complete, the box containing the remains was placed in the vault of the general bursar’s office which had not yet been used. It only came out again at the time of burial on December 8, 1925.

Note: Photo at the top of the page | Tomb of Mother Marie-Rose – Outremont – circa 1925

Tomb of Mother Marie-Rose in Outremont – 1990