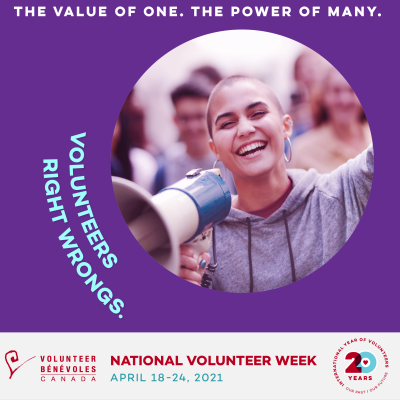 Did you know? Canada is home to the first celebrations to recognize volunteerism. The country celebrated its first National Volunteer Week in 1943. The original idea was to recognize the important contribution of women during the Second World War. After the war, these celebrations ended. They reappeared in the late 1960s. National Appreciation Week, as it is known today, was formalized in 1990.

In 1974, the United States proclaimed National Volunteer Week. Since the first call for Americans to find a volunteer opportunity, the week has grown.

Today, there are more and more actions during this week and during the month of April to encourage people to give their time to various causes to improve their community and, at the same time, to thank all volunteers for their remarkable contribution.

The theme for National Volunteer Week in Canada is “The Value of Each, The Power of Many”. The theme is to recognize the values of caring and compassion for others and to raise awareness of the power of individuals and organizations to work together to bring about change in their immediate communities, including legislative changes.