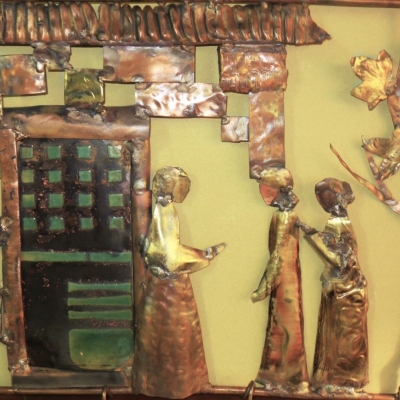 The first teaching religious congregation founded by a Canadian woman was established on October 28, 1843. Bishop Ignace Bourget shared with Eulalie Durocher his wish to “found here, without delay, a community… to multiply the means of exercising charity and giving religious education to boys and girls. “During his interview, he asked her to “return as soon as possible to Longueuil, with Miss Dufresne, to begin the planned establishment.” 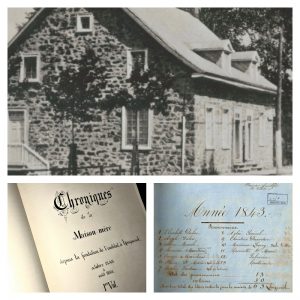 In a letter dated October 18, 1843, two days after her interview with Bishop Bourget, Eulalie Durocher wrote to her friend Mélodie Dufresne inviting her to join her as soon as possible for this daring project. “… Our divine Master wants us to follow him, laden with a long and beautiful cross; I hope that courage will not be lacking…” 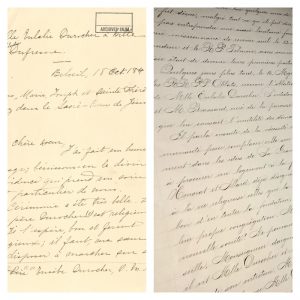 Thus Eulalie Durocher and Mélodie Dufresne joined Henriette Céré, already a teacher at the École de la Fabrique in Longueuil, to found the congregation of the Sisters of the Holy Names of Jesus and Mary (SNJM). During the founding ceremony, they received their religious names of Marie-Rose (Eulalie), Marie-Agnès (Mélodie) and Marie-Madeleine (Henriette).

Since its foundation, more than 10,000 young girls have applied for admission to the Congregation, most of them from Canada, the United States and Lesotho, but also from more than 29 countries, including Irish women at the time of immigration. Today, the sisters of the SNJM have missions in Canada, the United States, Lesotho, South Africa, Peru and Brazil. Some also have special ministries in other countries, such as Nicaragua and Hong Kong.

Photo reference at the top of the page

Artwork by Paula Mary Turnbull, SNJM, of Spokane, Washington (2013).
Copper wall relief depicting the foundation of the SNJM Congregation evoking the ongoing call to mission throughout the world.