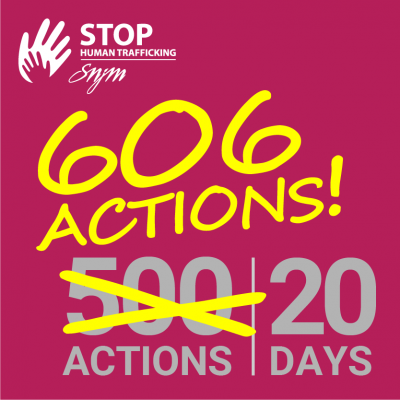 The Sisters of the Holy Names of Jesus and Mary’s (SNJM) 500 Actions Against Human Trafficking in 20 Days campaign ended on February 8, with a total of 606 actions being taken, including prayer, education, advocacy and other activities.

The call from the SNJM Justice, Peace and Integrity of Creation Committee (JPIC) to reaffirm our commitment to our SNJM Corporate Stand on Human Trafficking, was heard throughout the Congregation. Our elder sisters participated enthusiastically, organizing daily prayer activities and increasing their knowledge on the issue through video education. All across the Congregation, Sisters, Affiliates and Partners engaged in a variety of actions including prayer, education, advocacy, and support for survivors. 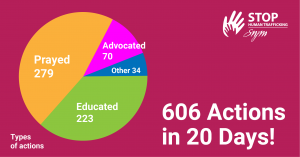 The SNJM action campaign was a way to continue the work of awareness, education, and vigilance against human trafficking that has been underway since 2004, when the SNJM corporate stand on this issue was adopted. It was part of Human Trafficking Awareness Month in the United States (January) and extended to the World Day of Prayer and Reflection Against Trafficking on February 8, in honor of St. Josephine Bakhita.

While the 20-Day action campaign has ended, our work to eradicate human trafficking continues. Join us by taking action to end human trafficking. You can find useful resources through the following websites: