The Arts: A Science that Lifts the Spirit. The example of music 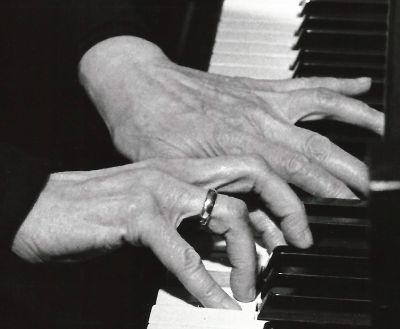 Based on the SNJM Study Plan, we can see that, for the Congregation of the Sisters of the Holy Names of Jesus and Mary (SNJM), the teaching of all subjects is important and complementary. From this perspective, the arts hold a special place in education. In fact, there are many artists among the Sisters (and their students) who consider that the arts contribute as much to a person’s full development as does academic education.

In 1843, as Monsignor Bourget was working on the founding of a religious congregation to educate poor young girls in Longueuil, he knew that he wanted the Sisters to teach music and drawing. To fulfill this desire, in 1844, Mother Marie-Rose borrowed the piano of Moïse Brassard, the parish priest in Longueuil, and appointed Sister Véronique-du-Crucifix as music teacher. Then in 1845, she hired Mr. William Benziger to teach piano.

Over a two-year period, Mr. Benziger gave each student (including Sister Véronique-du-Crucifix) three lessons per week. Mother Véronique-du-Crucifix was thus able to improve the quality of teaching methods for music. In addition to the various academic subjects and the creative arts, the first versions of the Study Plan included chapters specifically related to the teaching of music. Later, SNJM Sisters would work to develop rigorous pedagogical programs that included questionnaires, exams and manuals.

Development of a music program

With regard to the teaching of music, in 1920, the General Superior of the time decided to create the position of Director of Music Studies and to entrust Sister Marie-Stéphane with the development of a program. Sister Marie-Stéphane also became the first Director of the SNJM Department of Music Studies and later foundress of École de musique Vincent-d’Indy in Outremont. According to her, “Music theory is primarily concerned with intelligence and reasoning, and its study corresponds to the study of mathematics. It can be said that these two fields of study lend themselves to each other, because the intellectual development acquired through knowledge of the one facilitates the study of the other.”

This first music studies program, which spanned a ten-year period, was published in 1921. To begin with, Sister Marie-Stéphane provided the teachers with essential teaching materials, established a monthly distribution of work for each year of the program, and set compulsory exams. However, in music, learning theory is not enough. Neither is it enough to learn how to play or sing. If music is an art that one learns by practicing, transmitting what we know to others is also an art, the art of the true science of education. Consequently, as early as the summer of 1922, Sister Marie-Stéphane began offering music pedagogy courses to the Sisters destined to teach music. Thanks to these pedagogical principles and methods, in place since the opening of the École supérieure de musique d’Outremont in 1932, the institution enjoyed rapid and uninterrupted success.

The music program developed by Sister Marie-Stéphane was used in the schools of the Congregation. In Quebec, many students, even those from rural areas, studied music using this method and passed their exams without having to travel to Outremont. In the 1930’s, the completion of the ten-year music program gave students access to higher education in SNJM institutions such as École supérieure de musique Vincent-d’Indy, Marylhurst College in Oregon, or Holy Names College in California. Thanks to these schools, students could become artists, concert musicians, composers and educators while preserving their individuality and artistic sense.

In the early 1930’s, Monsignor Piette, Rector of the Université de Montréal, was so impressed with the quality of the music he heard, and the professionalism of the curriculum at École de musique Vincent-d’Indy, that he claimed the program offered a university-level education. With the consent of the SNJM authorities, Sister Marie-Stéphane requested that the École supérieure de musique become an institution affiliated with the Faculty of Arts of the Université de Montréal. 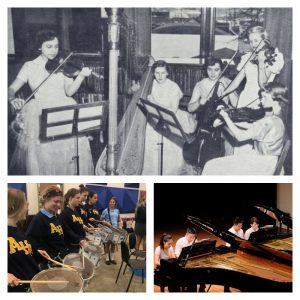 A student in the school’s music program, after completing a certain number of years and passing the required exams, would obtain a Bachelor’s degree. This gave young girls access to university. Some former students, both religious and lay, would go on to write theses and dissertations on the place of the arts in education. For example, Sister Marie-Stéphane’s doctoral thesis, published in 1936, is entitled “Music from an Educational Perspective” (La musique au point de vue éducatif). Later, in 1956, Sister Paul-du-Rédempteur wrote a dissertation entitled “Art Education” (L’éducation artistique).

Over the years, music education found its place in the public schools where SNJM Sisters worked. To this day, music is still being taught in the schools of the Congregation. And in Outremont, École de musique Vincent-d’Indy continues to exist and offers music-study programs at the elementary and high school levels, as well as college-level education. In each case, the current method is based on the music teaching framework established by Sister Marie-Stéphane. Throughout its history, this school has welcomed internationally-renowned lay teachers as well as students from all over the world. 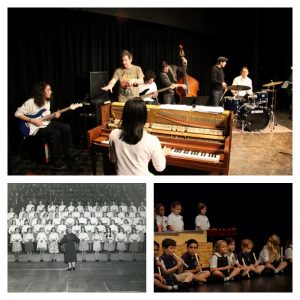 An exhibition on the SNJM mission of education

Since the spring of 2019, the Sisters of the Holy Names of Jesus and Mary have been offering the archival exhibition “Education for Young Women: Central to the SNJM Mission” at the Congregational House in Longueuil. This exhibit illustrates how SNJM Sisters established schools and academic programs for girls for whom access to education was quite limited. The exhibition shows how several initiatives were put in place to enable girls to advance further and further in their studies: elementary and high school education, teacher training, commercial studies, home economics programs, as well as strategies to prepare students to access college and university.