50th – Echoes of the Jubilee Celebrations

“The year 1894 marked the 50th anniversary of the Congregation’s founding and the Sisters of the Holy Names of Jesus and Mary, listening to their hearts, wanted it to be one of joy and thanksgiving.” 1 December 8, 1894, ushered in the Jubilee Year. On that very date, 50 years earlier, the ceremony of profession of the foundresses and the canonical establishment of the Congregation had taken place at the Longueuil Convent. It was thus fitting that the first celebration of the Golden Jubilee would be held there. Among the guests, members of the clergy and general councillors who attended the mass in the Chapel, was Mother Véronique-du-Crucifix, who had been present for the 1844 celebration. After the religious ceremony, an afternoon performance in the meeting hall of the convent recalled the origins of the Institution. The day ended with the participants happily looking forward to the jubilee celebrations of the Sisters of the Holy Names of Jesus and Mary (SNJM) to be held on July 16, 18 and 20, 1895, at the Mother House in Hochelaga. 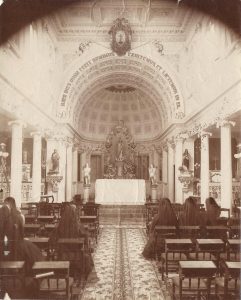 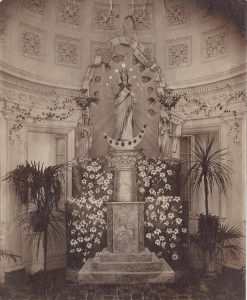 For this triduum, the Boarding School was wonderfully decorated with flowers, garlands, with 50s and JMs. The first day, July 16, was a special one for the Sisters, who welcomed several high-ranking members of the clergy, sisters from other religious communities, and, above all, SNJM Sisters from Oregon, Manitoba, Florida, Ontario, New York and California. The festivities began with a mass celebrated by Bishop Fabre, Archbishop of Montréal, at which Bishop Langevin, Archbishop of Saint-Boniface, preached the sermon. This was followed by a luncheon, some songs and a celebration to mark the golden jubilee of Mother Véronique du-Crucifix.

The second day of the triduum, July 18, was devoted to the SNJM family. In addition to the sisters and students, there were nearly 300 alumnae from all over Canada and the United States in attendance. The day began with a mass, followed by a banquet during which former students shared many memories of the past. Afterwards, the guests attended an historical presentation prepared by the sisters and current students.

The third day of the triduum, July 20, was dedicated to those no longer present. A commemorative mass was celebrated in honour of the foundresses, sisters, benefactors, students and friends who had passed away.

Throughout the festivities, the guests wandered through the classrooms. Several of these classrooms “had been transformed into museums with exhibits of school work of all types that testified, with irrefutable eloquence, to the precious and solid results of the education provided by [the Sisters] of this Institution, from the perspective of art and home economics as well as from the perspective of intellectual pursuits” .2 In fact, sisters, novices and students in every grade and throughout the community participated in the 50th anniversary by composing music and creating paintings, drawings, embroidery, etc. Works of art were also presented as gifts. These included a vase painted by an SNJM artist in the novitiate in Oakland, California. 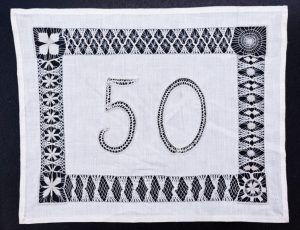 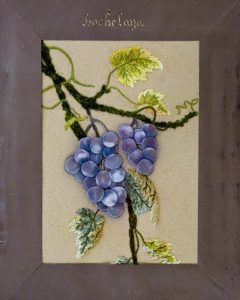 While the Mother House in Hochelaga hummed with festivities, the sisters spent their time with the missionary sisters “who had come from near and far to celebrate […] this great jubilee. […] Their presence always brings new joy to the whole family. We never tire of listening to them. In their conversations, which are always so interesting and pleasant, they speak to us of our dear absent ones and do so in such a way as to make us feel that they are living here with us. We are happy to learn that those who have never visited the Mother House have the same customs, the same religious spirit and the same aspirations as those who have always had the privilege of living there. They are our sisters, in the truest sense of the word, and demonstrate it everywhere and all the time.”3 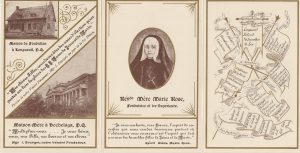 On August 16, a special event concluded the festivities: 200 Sisters went on a picnic at the Outremont farm. December 8, 1895, marked the close of the Jubilee Year. During a mass in the chapel of the Mother House in Hochelaga, everyone recalled the celebrations that had taken place over the summer and prayed for the continuance of the work begun by Mother Marie-Rose, Mother Marie-Madeleine and Mother Marie-Agnès. Looking forward to the 100th!

For a pdf version of this text, click here.