Many SNJM events could be highlighted for the month of March; we have selected the following two events.

During the first months after the foundation of the Congregation of the Sisters of the Holy Names of Jesus and Mary (SNJM) in October of 1843, the new candidates Eulalie Durocher, Mélodie Dufresne and Henriette Céré had much to accomplish. They needed to organize their school, and their community life as well, while seeing to their religious formation.

The nascent congregation quickly attracted young women and new students. In fact, in August of 1844, the 7 novices, 2 candidates, 13 boarders and 50 day students moved out of the schoolhouse belonging to the Fabrique of Longueuil; it had become too small. They moved into a house that had been purchased by the Fabrique de Longueuil in 1842 in view of establishing a religious community dedicated to education – the Longueuil Convent.

In December of 1844, the foundresses made their religious profession and Mgr. Bourget, Bishop of Montreal, proceeded with the canonical erection of the Congregation. However, it was on March 17, 1845, that the bill of incorporation of the Community, written by Mr. Louis Lacoste, elected member of Chambly – was approved by the Legislative Assembly of Quebec. The Community of the Sisters of the Holy Names of Jesus and Mary, founded for the instruction and education of youth, had now obtained its civil incorporation. Only sixteen months following its foundation, the Congregation was recognized both canonically and civilly. 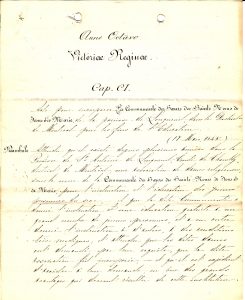 The month of March has special significance for the sisters of the Holy Names of Jesus and Mary of Manitoba. Indeed, on March 23, 1962, Mother Isidore-de-Séville, Provincial Superior of Manitoba, received from Mother Marie-du-St-Sacrement, General Superior, the announcement of the official decision of the community to establish a pastoral mission in Brazil, along with other congregations. This decision was, in effect, a response of the General Council of the Congregation to the December 1961 circular letter of Mgr. Baudoux, Archbishop of Saint-Boniface, explaining the necessity for religious communities to go to minister in Brazil. 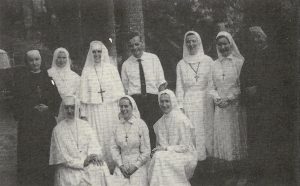 July of 1962, Sisters Marie-Philéas and Marc-de-Jésus, the SNJM co-foundresses of this mission, arrived in Brazil. They began with a period of immersion in Portuguese and then later undertook pastoral ministry in parishes, including the formation of catechists. The SNJM mission in Brazil continues to this day.