150th anniversary of the arrival of SNJM Sisters in Key West, Florida

In October 1868, Sisters Marie-Euphrasie, Marie-Angélique, Marie-Octavie, Marie-Monique and Marie-Pierre of the Congregation of the Sisters of the Holy Names of Jesus and Mary in Hochelaga made a perilous journey consisting of a one-day train trip followed by eight days on board a cargo ship, the Sedwidge. Their sea voyage from New York to Key West, Florida, prepared them for what would be an equally turbulent mission on this faraway island.
Bishop Vérot of Savannah entrusted the SNJM Sisters with the task of educating the young people of Key West.

As the only women religious in the area, the SNJM Sisters devoted themselves to looking after all the educational, spiritual and health care needs of the diversified population.
They faced many challenges: yellow fever, typhoid, smallpox, measles, diphtheria, quarantines, excessive heat, hurricanes and war.
The teachers often became nurses in homes and hospitals, offering support to their students’ families and to the City of Key West. As we commemorate the 150th anniversary of the foundation of the first SNJM convent in Florida, a few excerpts from the Sisters’ Chronicles might help illustrate their story and their dedication.

April 4, 1898 : With the growing likelihood of war between the United States and Spain, the Superior of the Key West convent and a companion “arrived at the armoury where the Commander of the [American] Navy, [James M. Forsyth] had his office. ‘We have come to offer our help for your wounded, in case of war. If necessary, we will also offer our convent and the two Catholic parochial schools for the sick and wounded, keeping for ourselves only what is necessary.’ ”
April 23, 1898 : The Sisters closed their school. The Key West Chronicles described the changes caused by the troubled times and the war. “In less than a day, our convent underwent a complete transformation: desks, benches, library shelves, pianos and other furniture were removed, and all the nooks and crannies were checked and cleaned . . .  Our little parlour is now a pharmacy; the music room and student dormitory are reserved for sick or wounded officers. The infirmary has become an operating room. The medical corps is occupying the grade 1 classroom and adjoining room. The five rooms that make up the first floor of the convent, and also our schools, will serve as wards for the poor wounded or sick soldiers and seamen.”

May 12, 1898 : The first wounded men arrived at the Convent-hospital. During the month of May, the Sisters, under the direction of doctors and nurses, cared for, among others, “six seamen suffering from measles,” “one seaman who had fallen into the hold of his vessel and fractured his spine, two others who had accidentally broken their legs, and five who are recovering from fevers and need rest.” On May 22, 1898, a “young seaman, . . . wounded on May 12 in the Battle of San Juan, was obliged to have his right arm amputated this morning.” It was the first surgery performed at the Convent-hospital. 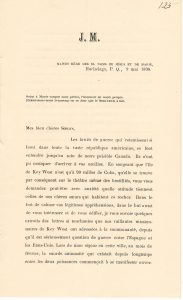 A circular letter from the General Superior of the SNJM Congregation published letters from the Sisters exiled in Key West.
“July 7 – Letter from Sister M. Florentine – Yesterday was a very eventful day for us. Around 6 p.m., the Major received a dispatch informing him that three hundred and twenty wounded would be arriving that same evening. In the blink of an eye, our small community was hard at work. Two hours later, all the cots were ready. One hundred and twenty were set up in enormous
tents pitched in our yard.”
“July 8 – Letter from Sister Jean l’Évangéliste – We are currently caring for a large number of wounded who arrived from Santiago last Monday, the sixth. These poor men were totally worn out. As we handed out pyjamas, night clothes and hospital gowns, we overheard them saying, ‘Now that we are with the sisters, we will lack nothing.’ As I write this, the Major is asking that we prepare to receive another one hundred wounded tonight.”
“July 13 – Letter from Sister Thomas de Jésus – We now have, on our grounds as well as in the convent and schools, two hundred and seventy-five patients, including twenty-eight with measles and a few with malaria; the others are wounded. . .  If you could only see these poor soldiers! . .  . Some have broken arms, others broken legs; a few have been shot right through the neck by bullets; one was shot in the right thigh and the bullet went right through the peritoneum and came out the left thigh; another had the base of his skull perforated. . .
I accompany the doctors on their rounds in my department, which encompasses the entire first floor of the convent. I write the doctors’ reports and the patients’ clinical charts and I use whatever spare time I have left to write letters for the patients. On Sunday, I bring to church those who want to attend Holy Mass.” 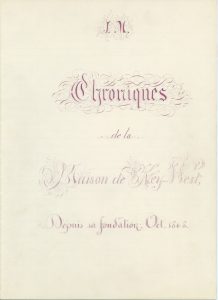 “July 15 – Letter from Sister M. Florentine – Our students are very sad; they say that they cannot bear to see their beautiful convent converted into a hospital in this way. However, despite these feelings, they have joined in our work. Former and current students have organized charitable clubs. Every day, they visit the hospitals, handing out clothes, cigars, refreshments, etc. to the patients.”

As evidenced by the Chronicles, for four months, the SNJM Sisters generously offered their convent and their schools, as well as their wholehearted and tireless dedication.
“August 22, 1898 – Last Wednesday, all our ailing seamen said good-bye. . . .  This morning, it was the soldiers and all the hospital staff. Nurses, doctors and even the sick seemed reluctant to move out from under the roof of the Convent hospital, which they say will always hold the best of memories for them.”