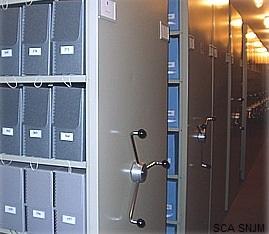 Since the earliest days of the Congregation, the Sisters of the Holy Names of Jesus and Mary (SNJM) have understood the importance of preserving their archives. In fact, Monsignor Ignace Bourget, Bishop at the time, taught the founding sisters how to keep records and write chronicles. Over the years, the general archives have been kept in the different mother houses of the Congregation and have thus been moved from Longueuil to Hochelaga, then to Outremont, and then back to Longueuil in 1984. Over time, preservation techniques have improved and, luckily, the SNJM archives have never been touched by flood or fire.

Since their return to Longueuil, the SNJM archives have been kept in optimal conditions that meet archival standards for conservation and security. To be more precise, the documents are kept in acid-free folders and boxes, and the boxes are shelved on racking made of metal, an inert material, in a vault where the temperature and humidity are carefully controlled. Even the lights pose no danger as they do not emit heat or UV rays. These conditions help the materials of which the documents are made (paper, ink, glue, chemical products used in photographs) remain stable. In an uncontrolled environment, they would continue to deteriorate. 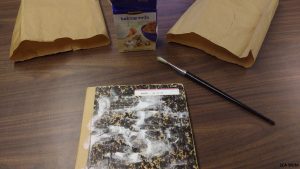 Despite all these efforts, some documents may have been affected by humidity before being kept in the Central Archives Department. Other very old documents may be suffering the consequences of time and use. Various conservation techniques are used to ensure that they are well preserved. 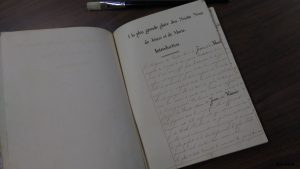 The archivists recently used one of these techniques on a book of teaching notes written by Mother Véronique-du-Crucifix at the end of the 19th century. A light coating of sodium bicarbonate was spread over the cover and first pages of the notebook. It was then placed in a brown paper bag for 48 hours. After the sodium bicarbonate was delicately removed, the particularly bad odour given off by the notebook had disappeared and all that remained was the smell of old paper. The notebook could then be put back into its archives box and be preserved for another 150 years. 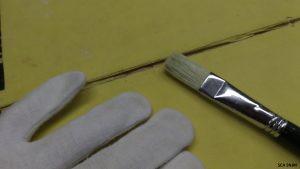 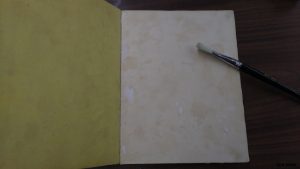