A strong presence at the 4th World March of Women 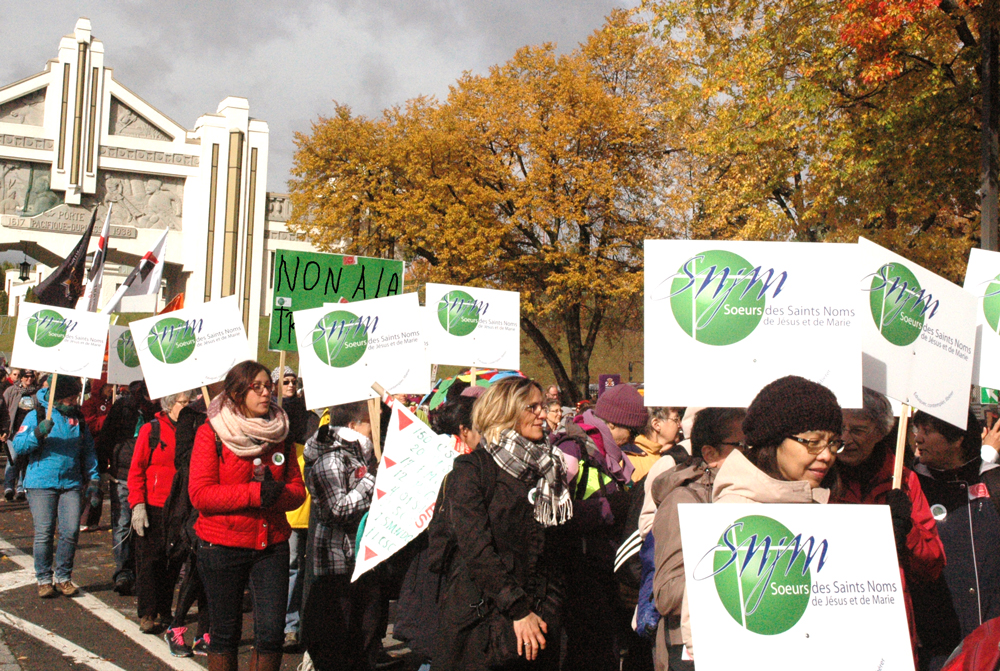 Longueuil, Quebec, Canada – October 21 – An SNJM delegation of about 50 women, a good number over 80, join thousands of other women to walk the streets of Trois-Rivières as part of the 4th World March of Women. Colourful posters and a catchy slogan drew attention to their participation in the March.

Opposed to the traffic in human beings

The Sisters of the Holy Names use the opportunity to denounce the traffic in human beings. In an effort to promote human rights and to combat the traffic in women and children and their sexual exploitation, or forced labour, the Congregation took a position on the issue in 2004. Dedicated to the struggle, the Congregation works on its own and in collaboration with other organizations to promote policies and programs to put an end to the illegal traffic in human beings.

During the March, the SNJM were particularly touched by the support and solidarity shown indigenous women. Sr. Denise Riel, the SNJM’s Quebec provincial facilitator, was particularly struck by one of the placards that read “If we are to stay standing, we need to keep moving”.

Sr. Lise Gagnon, who has been actively involved in the movement going back to the 1995 Bread and Roses March, was brimming with enthusiasm. “I feel a real joy every time I participate. It is exciting and encouraging to see that the values promoted by the World March of Women affect everyone, people of every ethnic origin, the young, and the not so young alike. More and more, we realize that we need to fight to preserve what has been gained. Indeed, the resounding success of the 4th World March should encourage all of the groups involved to intensify their work for equality and justice.”

Giving voice to the voiceless

Even if difficult to put into words, many of the SNJM’s 50 person contingent were moved by the solidarity and intense human chemistry that they experienced. There was a clear consensus that everyone was proud to have added their voices to the tens of thousands of women in attendance and to have borne witness to intolerable situations of poverty and violence around the world.

Perhaps Sr. Catherine Ferguson, the Superior General of the SNJM, said it best in concluding that “the World March of Women was a concrete way for us to express our solidarity with all of the women in the world suffering from violence and injustice. It was also an ideal opportunity to denounce all forms of violence perpetrated by the trade in human beings against women, men and families”.

Before becoming Superior General, Sr. Ferguson was one of the founders of UNANIMA, an international NGO with representative status at the United Nations. Sr. Ferguson has always been pleased and impressed to witness the strength of the Québec feminist movement’s solidarity. “In their representations to the United Nations, Québec women’s groups are a strong voice of solidarity for women’s equality. I have always sensed a good deal of affinity between it and the values of our Congregation. I am very proud and happy to have been able to join with the movement today.”

About the Sisters of the Holy Names of Jesus and Mary

The Congregation of the Sisters of the Holy Names of Jesus and Mary (SNJM) is an international community of Catholic women religious. In their mission, the SNJMs act with the cooperation of associates, lay consecrated persons, volunteers, colleagues and friends. Founded in 1843 in Longueuil, QC, Canada, the congregation carries out its mission of education on three continents. Visit www.snjm.org