Earth Day, April 22, is a good time to point out the various advocacy activities concerning environmental issues, particularly, access to water.
Even before taking an official position on water1, and always preoccupied with the well-being of the poorest, the Sisters of the Holy Names of Jesus and Mary sought ways to provide access to safe drinking water, especially for people in developing countries.

The history of the Congregation is filled with examples of water tank and wells construction projects to supply water in Brazil, Haiti, Peru and Lesotho. In those countries, the sisters, helped by citizens, are working to build wells since the early 1930’s. 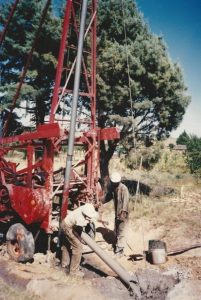 Sister Gisèle Foucreault (Lucien-Joseph, snjm), in Lesotho since 1963, has been aware of the multiple needs of Basothos including access to safe drinking water. Through various means of financing, an “initial undertaking was launched in a village at Motloheloa, not far from Mazenod, in 1980. […] With the wise guidance of Sister Gisèle, villagers in Lesotho began organizing for water pumps. The wells were to be communal, with a minimum of ten families per well. […] More and more holes were drilled and pumps installed in the villages around the Mazenod mission. Many women and children could now carry clean water from the magical liliba (fountains).”2 In 20 years, Sister Gisèle and her team have drilled and installed 1086 hand-pumps in 150 villages of Lesotho.3